Samarkand is one of the world's oldest cities: its history goes back 2,750 years. Samarkand was the capital of several countries, an economic and cultural center of the region, as well as a key checkpoint of the Great Silk Road from China to Europe. What places in Samarkand and other cities of Uzbekistan are worth visiting for each tourist?

“Registan” was the name of a central square in any Middle East city. This word consists of two parts: “reg” which means “sand” and “stan” which means “a place”. But how is a central square related to sand? According to one version, sand was used for sprinkling stones after public executions. According to another, more peaceful, version, the land here was strewn with sand to secure the nearby main water supply canal.

Samarkand’s Registan Square is famous for its unique ensemble, which is considered one of the best masterpieces of Islamic architecture in the world. The center of this ensemble boasts three madrasas — Muslim institutions of higher education built in the typical oriental style. They are magnificent monuments of oriental architecture. This architectural ensemble is included in the UNESCO World Heritage List.

In the 15th century, Ulugbek began to decorate the square. The first building of Registan Square was Ulugbek madrasa. In the 17th century, Yalangtoʻsh Bahodir ordered to construct large Yalangtoʻsh madrasa, which was later renamed to Sher-Dor (“a house decorated with lions”). This building has been under construction for 17 years. The madrasa stands strictly on the axis of the Ulugbek madrasa and replicates its facade.

Tillakori madrasa, which was built by Yalangtoʻsh Bahodir already in his declining years, completed the northern part of the ensemble. Since both cathedral mosques of Samarkand were abandoned by that time, builders faced a difficult task of embedding the Friday mosque in the madrasa.

In addition, Registan also features Chorsu — an ancient trading dome that proves the status of Registan Square as a trading center of medieval Samarkand. In 1989, a five-ruble commemorative coin dedicated to Registan was minted in the USSR.

The remains of Amir Temur, the great ruler and conqueror, as well as his male descendants, rest in the Guri Amir Mausoleum. The construction began in 1403 by order of Amir Temur for his beloved grandson Muhammad Sultan Mirza who died during one of the military campaigns in Asia Minor. In 1404, Temur went on a military campaign against China, the dream of his life. However, in February 1405, he died of pneumonia in Otrar. His body was quickly transported to Samarkand and buried in the mausoleum. Since then, the mausoleum has been called Guri Amir (“Tomb of the ruler”). Guri Amir strikes with its splendor and grandeur. Some researchers even believe that the legendary Taj Mahal in India was inspired by the architecture of this mausoleum. The best Eastern masters carefully selected by Amir Temur himself decorated the mausoleum’s interior.

During its long history, the Guri Amir Mausoleum has acquired many legends. For example, people believe that a jade slab over the burial place of Temur can bring misfortune to those who visit this tomb with unclean thoughts in mind. The tomb of the Great Conqueror attracts his admirers and oriental architecture fans all year round.

One of the most significant observatories of the Middle Ages was built by Ulugbek, the grandson of Amir Temur, in 1424–1428 on the Kuhak hill near Samarkand. The ruined rounded wall of the observatory along with the lower part of the huge main instrument deepened into the rock by up to 10 meters were found and studied by the archaeologist V. L. Vyatkin in 1908.

Historians say that Ulugbek was a huge fan of astronomy. This observatory made his dreams come true. The scientific program of the observatory was designed for at least 30 years (the orbital period of Saturn).

Salah al-Din Qadi Zada Rumi, Jamshīd al-Kāshī, Ali Qushji, and other famous astronomers worked at Ulugbek's observatory. By 1437, the observatory compiled Zij-i Sultani, one of the most famous star catalogs. This star catalog contains the exact coordinates and detailed descriptions of 1,018 visible stars in the sky and 650 cities. The exact duration of an astronomical year — 365 days, 6 hours, 10 minutes and 8 seconds — was also determined there. Today, the most accurate value of this parameter is 365 days 6 hours 9 minutes and 9.6 seconds. Therefore the actual error was less than 1 minute.

After the death of Ulugbek, the observatory continued to work for another 20 years. The abandoned building of the observatory existed for a long time and was fully dismantled only at the beginning of the 16th century.

A vast ancient settlement to the north of modern Samarkand reminds of the location of pre-Mongolian Samarkand. This settlement, Afrasiyab, was named after the king of Turan — one of the heroes of the Persian epic. It was the very center of Samarkand starting from the 6th century BC until 1220 when Mongols destroyed the city.

Having survived the invasions of many conquerors, Samarkand, however, failed to recover from the raid of Genghis Khan who ordered to wipe out the entire city. The inhabitants were so shocked that they did not dare to live on these hills again. After returning to the ruins of Samarkand, they decided to settle nearby.

The total area of the ancient settlement is 219 hectares. Archaeologists have discovered 11 cultural layers of Afrasiyab that cover over two and a half centuries. The ancient settlement was crossed by straight cobbled streets and divided into blocks (“guzars”). It was surrounded by massive defensive walls to protect its citadel, Shahriston, along with temples, houses, and craft workshops.

Archaeological finds from the Afrasiyab settlement are exhibited in the historical museum of Samarkand, which was opened in 1970 in the eastern part of the settlement.

In 1965, archaeologists discovered a palace complex with wall paintings on the territory of Afrasiyab in Samarkand, which was a hallmark scientific discovery in the history of the material culture of Uzbekistan and the whole world. This palace was built in the 7th century AD and therefore belongs to the pre-Arab period. All four walls of the large square 11 x 11 meters hall boasted multi-color narrative paintings.

The paintings exhibited in the central hall of the museum at the Afrasiyab settlement were really unique for their historical period. They were found in the reception hall of the house only a few hundred meters west of the museum. In addition, scientists discovered the ruins of a large aristocratic house. This was most likely a palace or residence of the ruler himself in the third quarter of the 7th century..

Shah-i-Zinda is an ensemble of mausoleums of the Karakhanid and Timurid nobles in Samarkand. It is a complex consisting of 11 mausoleums that were successively embedded in each other during the 14–15th centuries. These mausoleums are covered with turquoise or dark blue tiles featuring floral ornaments.

The ensemble’s center boasts Kusam Ibn Abbas, which includes the ancient Mausoleum of Kusam Ibn Abbas, a mosque built in the 16th century and several other buildings. A door that leads to the complex shows the engraved years of construction: 1404–1405.

In 2001, the Shah-i-Zinda ensemble was included in the UNESCO World Heritage List. In 2004–2005, when the complex was overhauled and its fence was removed by order of the government of Uzbekistan, the scientists discovered ruins of an ancient mosque, a madrasa of the early Middle Ages (11th century) and traces of earlier mausoleums. 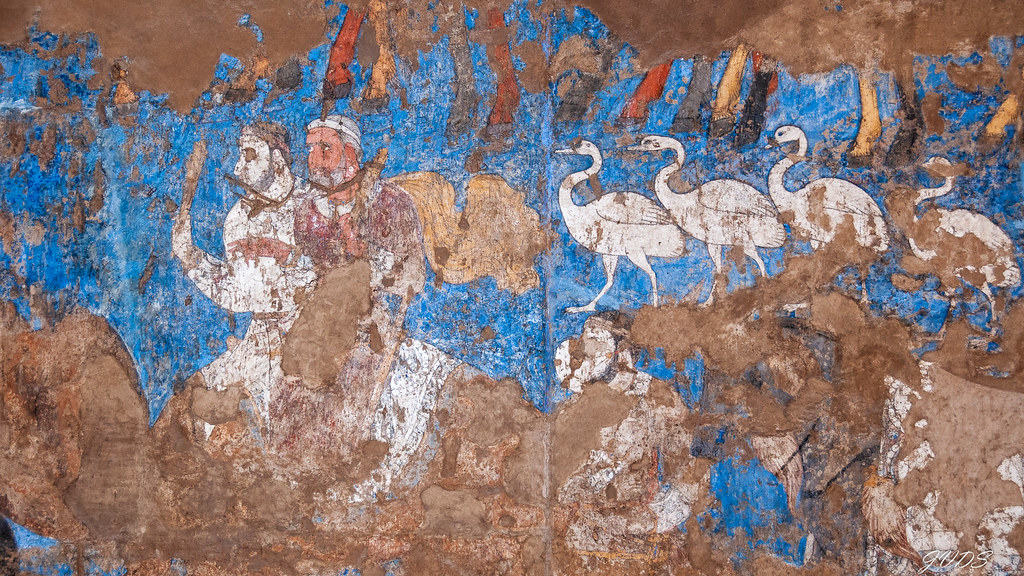 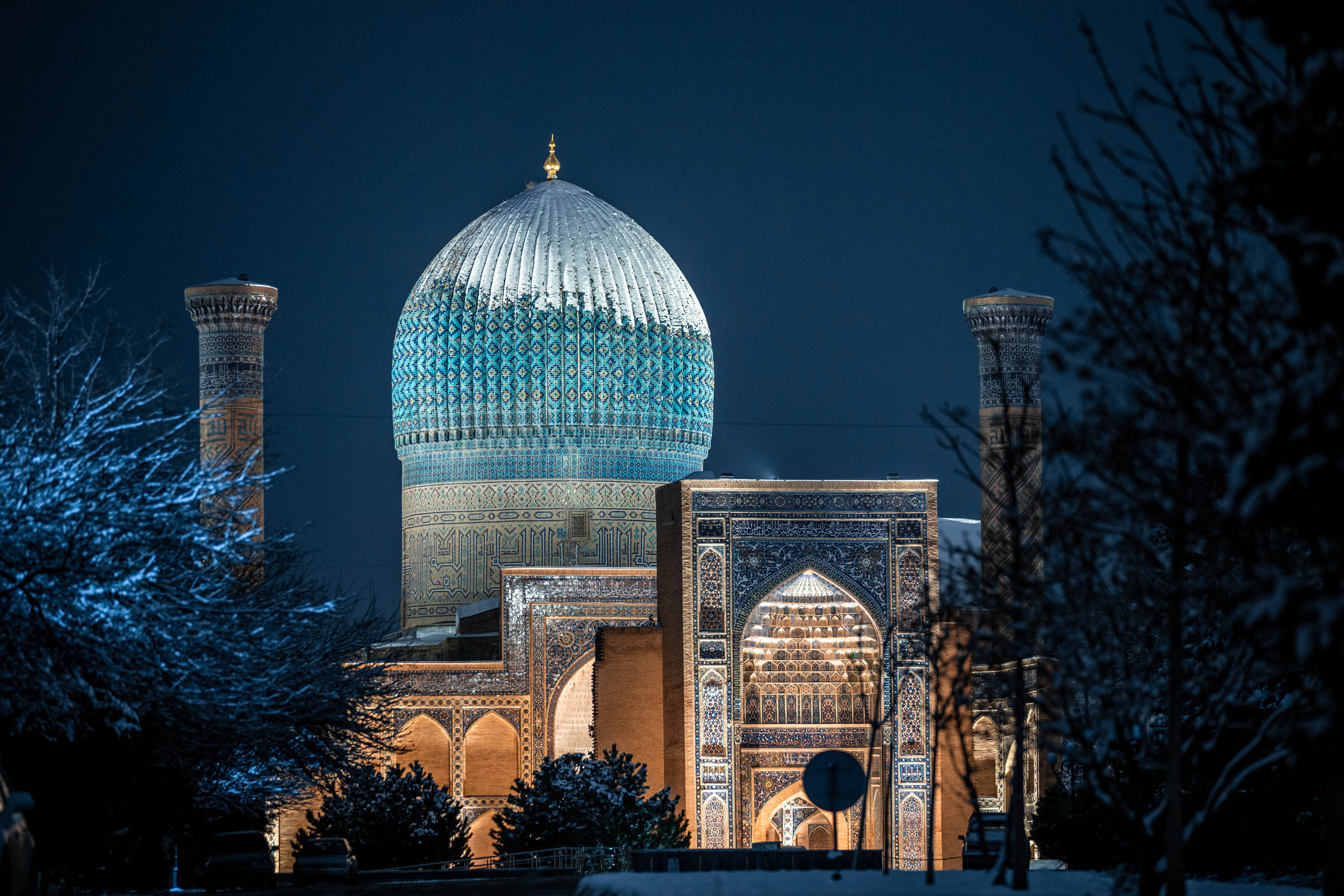